Live like a real Roman lives. Trastevere is the place where Rome proudly shows the real soul of its people: cheerful, easy-going, flashy and colorful. Stay surrounded by the joy and the light-heartedness of the neighbors, enjoy the quiet spots hidden among the streets and the alleys shaping the district, find anything you need to make your sojourn in one of our Trastevere apartments even more comfortable and reach any part of the city easily and fast from the jolliest quarter of Rome. Below you find our most popular Trastevere apartments and a link to all apartments in Trastevere. 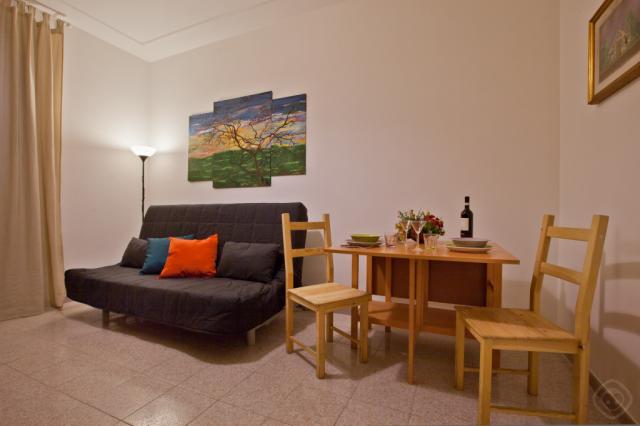 This cosy and charming 1-bedroom apartment for up to four people is located on the west bank of the Tiber river in the historic Trastevere district of Rome.
More about: Trastevere Market apartment Rome

Show all apartments in Trastevere

Transportation from Termini to Trastevere

When staying in one of our Trastevere apartments these food stores are in walking distance of your self-catering apartment and offer local and international grocery shopping. Not in the mood for home-cooking? In collaboration with our local partners we have selected some excellent restaurants to enjoy lunch or dinner.

Trastevere is the liveliest district in Rome, an evocative area made of intricate and tortuous narrow streets, medieval houses and picturesque squares just outside the city centre, at the southern edge of the Vatican mount.

In ancient times, during the growth of Rome, this area was separate from the rest of the city and partly occupied by fishermen and small Jewish communities. Later on, Emperor Marcus Aurelius englobed the the whole territory, up to the Vatican mount, within the city walls and many patricians also began to built their villas on this side of the Tiber’s river. Trastevere became, as a consequence, a populated district, where noble houses mixed with hovels in a complex and irregular, yet fascinating topography. Along the centuries the area went through many changes: in the middle age the streets were enlarged to allow passage to carriages and the paving was subjected to several modernizations.

Nowadays Trastevere is a vivid and bright district, with its cafés, restaurants, cinemas and theaters literally cramming with locals and tourists, lingering outside the wine bars until dawn.

The Church of Saint Mary in Trastevere, in the homonymous square along Via della Lungaretta, was founded during the III century and renovated many times in the following years. The upper side of its facade is covered in a beautiful mosaic from the XIII century portraying the Virgin nursing Christ, while at the top of the gothic bell tower there reigns a niched mosaic portraying a touching Madonna with Child.  Inside the chapel, another beautiful mosaic from circa 1290 overlooks the Altar’s back, along with other sacred and more recent paintings from the XIX century.

On Trastevere’s west side, the Gianicolo hill (Janiculum in English), Rome’s second highest peak, offers a breathtaking view over the city’s skyline. This site was first consecrated to Janus, the two-faced deity guardian of gates and doorways, and later, when Rome became the centre of Christianity, to Saint Peter. Tradition holds that Peter was crucified on this mount, where the Church of San Pietro in Montorio lies.  At Janiculum’s slopes, l’Orto Botanico, the botanical garden of Rome containing more than 3000 vegetal species, was established in 1883, right in the green area surrounding Palazzo Corsini, the Italian residence of Queen Christina of Sweden.

A must in Trastevere that cannot be missed is the Sunday market of Porta Portese. This enormously wide flea market takes place around the gate (Porta Portuensis in Latin) and wall that define the Janiculum’s walls built circa 1644 on Pope Urban VIII commission. Here you will find the oddest and most charming objects, bizarre clothes from the 20’s to the 70’s of 1900, modern and contemporary furnitures, vintage accessories and much more.

When staying in one of our Trastevere apartments these must sees are all in walking distance from your apartment!