The intricate streets surrounding the ancient amphitheatre and the ruins of the Roman Emperor host many of our Colosseum (Colosseo) apartments. Here you can have all the things you could possibly desire during your stay: a quiet spot few steps away from the parks and the ancient Forum or a room with a view over the restaurants, bars and busy corners of this magical place in the Eternal City. Below you find our most popular Colosseum (Colosseo apartments) and a link to all apartments near the Colosseum. 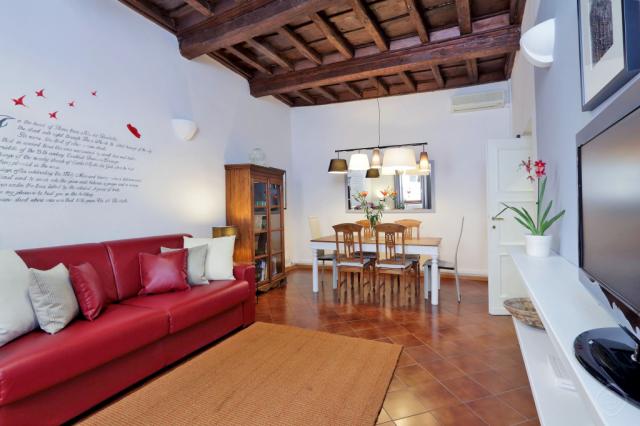 Show all apartments near the Colosseo

Transportation from Termini to Colosseo

There are options for street parking. Please note that most of these areas are blue zones (you need to feed a parking meter).

When staying in one of our Colosseo apartments these food stores are in walking distance of your self-catering apartment. Not in the mood for home-cooking? We have selected some excellent restaurants to enjoy lunch or dinner.

The Rione Monti, the first district of Rome, and the Campidoglio (Capitoline Hill) are the areas situated around the famous Colosseum, the greatest and most imposing amphitheatre of the ancient Rome, stretching from Piazza Venezia, the wide square hosting the monumental Vittoriano, also called Altare della Patria, the Altar of the Fatherland (in honor of king Vittorio Emanuele), down to the area surrounding San Giovanni square (south-east) and Circo Massimo (south-west), having the important Via dei Fori Imperiali (the Roman Forum with the Trajan’s Market) as the main street crossing the district in its length.

Having Piazza Venezia as a starting point, it is possible to reach the Colosseum from Via del Teatro di Marcello, walking across the Campidoglio, the first hill on which Rome was founded, and down through the Circus Maximus, situated between the Aventine and the Palatine hills.

The Colosseum itself is not only a symbol of the glorious Roman Empire, but also a true proud symbol of Italy. This majestic stadium created to host gladiators’ battles, dramas and comedies and many shows for an audience of more than 70,000 spectators, was built between 70 and 80 AD. The amphithreatre was filled up with water during special events, such as the sea battles, particular shows depicting famous battles of the ancient times: this fact gives a slight idea of the size and the greatness of this Roman architectural work.

The large complex of ruins extending on Via dei Fori Imperiali’s side was the “forum”, the centre of the ancient Rome’s life: housing the homonymous museum and the Trajan’s Market, a construction built in 110 AD as one of Trajan’s administrative sites. This is an area of Rome where ancient and contemporariness mix charmingly together: the Colosseum and the Trajan’s Market become suggestively brightened at night by the modern city lights: street-lamps and cars’ headlamps, the lovely windows of Via del Colosseo and the busy terraces of the bars in Via San Giovanni in Laterano, dress this ancient grounds and buildings with mysterious and yet romantic and suggestive colors.

Starting from Piazza Venezia and its Altare della Patria, it is possible to visit two museums:  the Museum of the Italian Risorgimento, housed in the Altar itself, offering a breathtaking view over the city centre, and – on the other side – the Musei Capitolini, the Capitoline Museums, in the Campidoglio square, this latter, with the imperial statue of Marcus Aurelius and the three Palaces enclosing it, forming a beautiful attraction on itself, designed by Michelangelo in 1536.

On the highest summit of the Campidoglio hill dominates the beautiful church Santa Maria in Aracoeli, literally Saint Mary in Heaven’s Altar, built on the ruins of a Byzantine abbey at the top of a monumental staircase, just at the side of Michelangelo’s staircase leading to the Capitoline Museums.

Proceeding down on Via del Teatro di Marcello, opposite to the historical Jewish district of Rome and to the Theatre of Marcellus (built in 12 BC), to Circus Maximus, you will enjoy the unforgettable experience of walking in an immense quiet green area suspended in time, right in the fulcrum of the busiest capital of Europe and its traffic!

Across the Capanne del Palatino lie the ruins of the ancient Rome, while right in the square around the Colosseum, the triumphal Arch of Constantine is situated. The street extending on the other side of the amphitheatre, is the ancient site hosting the Forum and leading up back to Piazza Venezia or down east to San Giovanni.

A walk in the park of Colle Oppio, just opposite to the Colosseum, is a must in a sunny, relaxed afternoon in town; this park is one of the many green spaces of Rome, open in 1871 as the public gardens of the Rione Monti district and the Colosseum area.

An area worth while exploring from one of our Colosseum or Colosseo apartments!

When staying in one of our Colosseo apartments you can just walk and experience all these Rome must sees!