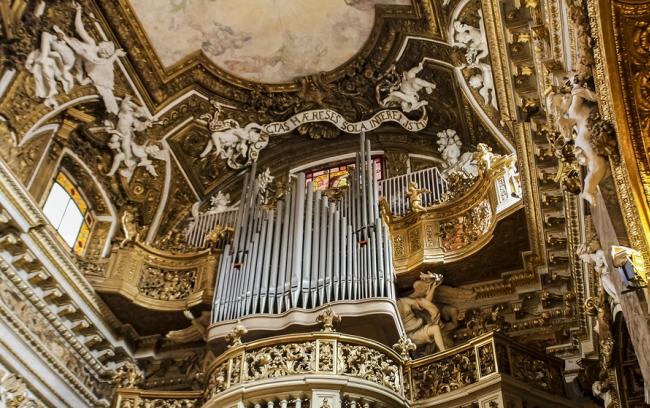 A beautiful old church and the home of Bernini’s Ecstasy of Saint Teresa.

Santa Maria della Vittoria as featured in the movie Angel’s and Demons is a stunning little Baroque style church and worth a visit on any leisure or business short stay in Rome. The church is also a popular destination as it houses Bernini’s famous statue Ecstasy of Saint Teresa.

During your short stay in Rome wander over to Santa Maria della Vittoria to appreciate a beautiful Baroque style church which is one of the favourite of the small churches in Rome. Dating back to the 17th century this is a titular church and dedicated to the Virgin Mary.

Fans of Dan Browns Angel’s and Demons may recognise it as it was a location in the book. And if you are a fan of art and historic sculptures then you will particularly enjoy viewing sculptor Bernini’s masterpiece titled Ecstasy of Saint Teresa. Santa Maria della Vittoria is located in central Rome, just walking distance from the Termini station so if you are staying in one of our short stay apartments in the area the church is only walking distance away. If you are a tad further away then it’s easy to get to via metro and the nearest station is Repubblica.

Bernini’s renowned sculpture can be found in the Cornaro Chapel and is considered one of the best Baroque sculptures in Rome and one of Bernini’s greatest works. Executed in 1646 it illustrates a moment that Saint Teresa of Avila described in her autobiography of envisioning an angle piercing her heart with a golden shaft, causing her both great joy and pain. On both sides of the chapel are ‘box’ seats and on the left side the half-hidden figure on the right end is said to be a self-portrait on Bernini. The other earthy figures are of the Cornaro family who commissioned the chapel. It is said that Bernini’s idea was to create a theatre-like appearance with the marble figures looking down to the scene in the statue.

Due to its new acclaimed fame following the feature in the afore mentioned novel the church has seen much more tourism, making it one of the top attractions in Rome that people from all walks of life visit during their short stay; while many other people go just to see Bernini’s masterpiece, which is best viewed in the afternoon with the light entering the church. Santa Maria della Vittoria is also part of the Bernini tour of Rome and Dan Brown’s Angels and Demons sights in Rome so if you opt for one of those tours you will be sure to visit this church anyway.

The church begun as a chapel in 1605 and was originally dedicated to the Christian missionary Saint Paul but after the Catholic victory during the Thirty Years War that ended the Bohemian period it was rededicated to the Virgin Mary. During its construction the sculpture Sleeping Hermaphroditus, which today is on display at the Louvre in Paris, was discovered and having attracted the attention of Pope Paul V’s nephew Cardinal Scipione Borghese, also a well-known art collector, he took the sculpture and in return funded the rest of the work on the church and its façade.

There are some other fantastic features inside the church. When you step in through its grand entrance look back and up above the entrance where there is an organ and ‘cantoria’, a balcony for solo singers, by Mattia de’ Rossi who worked with Bernini. The interior decoration is a great example of the Baroque style architecture and easily appreciated for its historic beauty. The paintings on the ceiling vault depict the Virgin Mary in the heaven among the angels, and the fall from heaven of the evil angels led by Lucifer. These two paintings, The Virgin Mary Triumphing over Heresy and Fall of the Rebel Angels were executed between 1654 – 1655 by a Baroque artist Giovanni Domenico Cerrini. There are a number of other outstanding paintings in the Santa Maria della Vittoria that you can view during your visit.

There is also a little shop in the back of the church with reasonably priced postcards and books that you can purchase for yourself or loved ones back home.