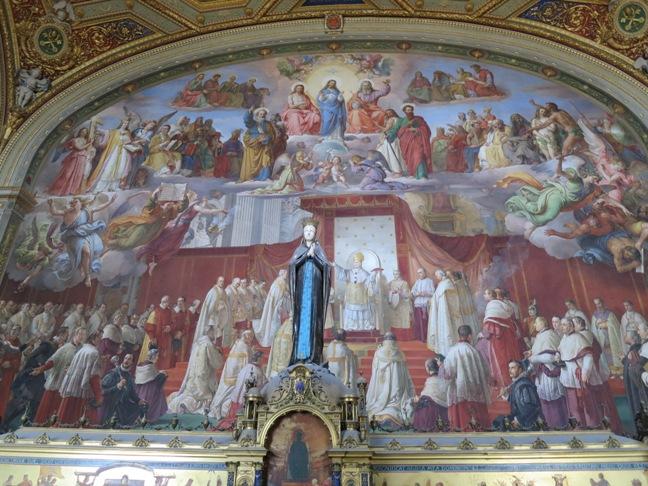 The City of Vatican is no doubt a special item on the sightseeing schedule of any visitor to Rome. It is where Christian tradition surviving to date gets mixed with the vision and craftsmanship of nonpareil artists from the past, the outcome of what is admired by thousands of people each year. The magnitude and splendor of this place inspires awe and adoration at the same time and each piece of this intricate puzzle is just as impressive on its own as it is as a component of the bigger picture. The stimulating gardens, the remarkable museums and the majestic basilicas and chapels – including the ever-impressive Sistine Chapel – are what makes a trip to Rome, in fact, complete.

A handful of facts about the Vatican:

The Vatican City is also known as the Holy See and despite its 0.44 square kilometers of surface area and a population below 1,000 has been an autonomic independent state since 1929 when it got separated from Italy. It has been the seat of the Pope since 1378, and is the recognized centre for Catholicism worldwide – after all, this is where Saint Peter’s Basilica – the most famous Catholic temple in the world – is located. The easiest way to enter the Vatican City through Saint Peter’s Square, which can be reached, in turn, by a short stroll from the direction of Castel Sant’Angelo – a magnificent local landmark adorned with the statue of Saint Michael, seen already from afar. Once you arrive to the Vatican, there’s quite much to see, so plan your trip wisely. Expect quite a bit of a crowd, but you can be sure that what the time spent on waiting will be rewarded when you finally get to see what you’re after. The following order of sightseeing is suggested: Saint Peter’s Square, Saint Peter’s Basilica, Vatican Museums and Sistine Chapel – apart from the Gardens of Vatican City, which come as a great bonus to catch a breath if you happen to be in need of a short time-out.

*If you still need some more information, the Vatican City Tourist Information center is the right place to ask. It can be found to the left side of Saint Peter’s Square and will provide you with all the information you might require, as well as with a selection of Vatican-themed items like maps, guides, jewelry and souvenirs. It is open from Monday to Saturday, from 8:30 to 18:30.

Cross the borders of the Vatican and let yourself be embraced by “the maternal arms of Mother Church” – the astonishing Saint Peter’s Square. It is a huge piazza which features fountains, massive Tuscan colonnades and a four-thousand-year-old Egyptian obelisk at the centre (which arrived there in the 16th century). The square functions as the gathering place for the believers – and as the prelude to what awaits you after you move further to discover the splendor of the Vatican. One very significant example of this splendor is Saint Peter’s Basilica resting upon Saint Peter’s Square and is one of the biggest churches in the world. It was erected on the site where Peter’s – the first Catholic Pope’s – tomb is. Bear in mind that the entry to the basilica itself is free of charge, but you have to respect the ‘dress code’, which requires no bare shoulders or knees, so tank tops, shorts and skirts are out. It is open from 7:00 to 19:00 every day (with the exception of the period from October to March, where the closing hour is 18:00) and masses are held on Sundays throughout the day – in Italian, for your information. Apart from its religious importance, the building is a home to many remarkable works by Michelangelo, like Pieta, but itself is also a major work of Renaissance art. Moreover, it is possible to visit the tomb of Saint Peter.

Over 1,400 rooms await you in the magnificent complex of the Vatican Museums. A small insider’s tip is that they are open free of charge on the last Sunday of every month (from 8:30 to 14:00, with the last admission at 12:30), but with the record-breaking number of 5,000,000 visitors (in 2011) expect the venue to be a bit crowded. Still, the absolutely spectacular Hall of Maps, the multitude of galleries with works of art collected over the period of 3,000 years, the main museum, a room filled with dozens of works by Raphael, an impressive Renaissance picture gallery by the name of Pinacoteca Vaticana, the massive Spiral Stairs, parts of the papal palace and the truly one-and-only Sistine Chapel are worth the waiting time and the effort it takes to get through all this mind-boggling maze of religious pieces of art. The Vatican Museums create altogether the world’s biggest museum complex and can be visited by way of four different itineraries, all of which end in the Sistine Chapel. Guided tour is the preferred way of visiting, as it’s really easy to get lost if you decide to go on your own; also, if you enter as part of a guided tour, you don’t have to wait in line, which does make a difference.

The final stop of any visit to the Vatican Museums, the Sistine Chapel is most surely the best-known chapel of the Apostolic Palace and the official residence of the Pope. It was built in the period of 1473-1481 and became decorated over time with many world-famous frescoes by top Renaissance artists like Michelangelo, Domenico Ghirlandaio, Pietro Perugino, Pinturicchio, Sandro Botticelli and others. Everyone is certainly familiar with at least one of the works of art featured inside this exceptional place, with “The Creation of Adam” or “The Last Judgment” being among the most famous ones. Equally impressive in size and in ornamentation, the chapel remains a sight often frequented by both believers and Renaissance art lovers, each group fully satisfied with the outcome of the visit.