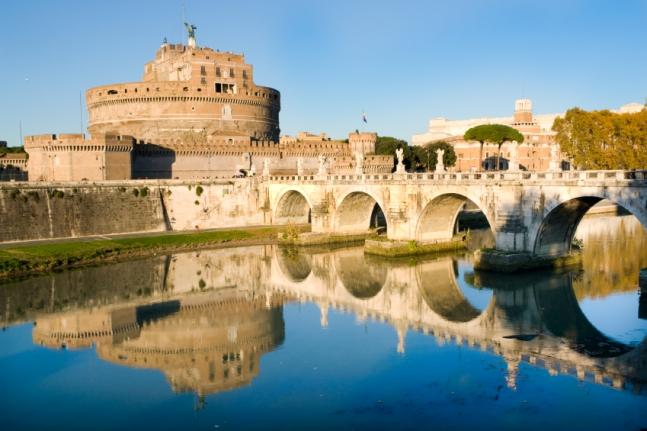 Rome is known as the eternal city and brings millions of tourists to visit the city’s amazing sites every year. On your way to these sites, there are fabulous streets where you can eat, drink, or just simply, sit and admire, while you take your photo shoots. As the famous saying states, “All roads lead to Rome”, let us then find the top 5 streets inside the Eternal City.

More than a street or avenue, more emblematic than any bridge, this ponte is the gate to Castel Sant’Angelo, where history meets the novel of Dan Brown, “Angels and Demons”. This bridge is one of those where you can easily spend a long time simply by looking at its architectonic details and admirable view: facing west you can observe and admire the San Pieter Basilica; to the north the astonishing castle of Saint Angelo; and to the south super crowded Rome with tourists, pilgrims or merchants of any type. The history of the bridge goes back to the 2nd century AD, and originally was known as Bridge of Hadrian, named after the Roman Emperor Hadrian. Already in the 7th century, Pope Gregory I named the bridge with its present name, inspired by the legend that an angel appeared to announce the end of the plague that ravaged a great part of the population in that century. Finally, the bridge had its current configuration with Pope Clement IX, when ten angels holding instruments of Passion were placed along the bridge.

On its way from Castel Sant’Angelo towards the west until Saint Peter’s Square we find Via della Conciliazione, one of the most fabulous roads of Rome which leads to the center of Catholicism in the world. At each side of the avenue there are pillars with old-fashioned lamps on the top. Besides that, you can find important monuments in this street, such as Palazzo Torlonia or the church of Santa Maria in Traspontina. Either way, the moment you step onto this street, you cannot leave it without appreciating the view in each direction. As for its history, the avenue was built between 1936 and 1950 and it constitutes the principal access to the Square and Vatican.

If you are in Piazza Venezia and have not yet visited the Colosseum, then you have the opportunity to go through this imperialistic avenue and see monuments such as Forum of Trajan, Forum of Augustus or Forum of Nerva at both of sides of the road. In the end visit the most famous monument of the old Roman Empire (the Colosseum). The construction of the avenue goes back to Mussolini’s regime and his ideal of a new Italian Empire, while honoring the old one, which is the reason why the via crosses main monuments of the old Roman Empire. Nowadays, this via is the place for the celebrations of the foundation of the modern Italian Republic.

It is really hard to name one street close to Fontana di Trevi worthier than another, simply because the entire area is full of life and joy, including very nice restaurants, cafeterias, ice cream places (and so fabulous they are!), and other places where you can take your time to eat a very typical pizza, drink a tasty red wine and for dessert, of course, a fabulous tiramisu. After that, if you are lucky, you can enjoy the sun next to fountain and throw your coin to ensure your return to Rome!

If you find yourself with spare time in Rome and want to do some shopping, this is the right street to look for. With plenty of shops on both sides of the road, as well as cheaper restaurants in the perpendicular streets, you can find a nice avenue for some leisure time and filling up your stomach. But not just shops and restaurants are famous in this street. This route is also the place for Tower of Milizie (in the southwestern most point), Palazzo delle Esposizioni and the headquarters of Banca d’Italia. At the northeastern most point, you find yourself in Piazza della Repubblica, where, besides the beauty of the buildings, you can find lot of transportation to take you on your journey through Rome.