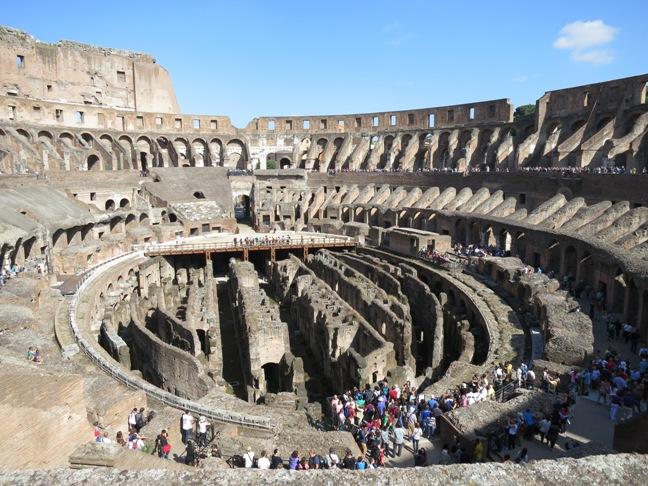 You can’t visit Rome without succumbing to its ancient history, images of Gladiators fighting in the Coliseum, worshippers at the Pantheon or the gentry roaming the Palatino all come to mind in this real life museum.

One of the most visually iconic structures of ancient Rome, this stadium originally built in AD 80 by Emperor Vespasian designed to hold up to 55,000 spectators.  The amphitheatre hosted games which lasted for 100 days and 100 nights, where condemned prisoners fought lions; gladiatorial fighters met in mortal combat and wild animals were set against each other for entertainment!  The Colloseum was abandoned in the 6th century after the fall of the Empire and has since been used as a Medeival Fortress, damaged by several earthquakes and quarried for its marble and travertine. Since 2010 the lower passageways have been open to the public giving a glimpse of life below the great stage above.  Queues for tickets can be long, a tip is to buy your joint tickets at the nearby Palatine ticket office and then bypass the queues.

The religious, commercial and political centre of ancient Rome, the forum hosts a large array of structures spanning many ages and is an amazing sight.  The area situated adjacent to the Colloseum in the south and running North West by Via Sacra.  The piazza was host to elections, triumphant parades, gladiatorial processions and criminal trials.  Having grown up in a very organic way, the buildings grew with little master plan, however several Emperors attempted to rationalise the space with some success.  The area includes some of the most important structures of the ancient world including; The Arch of Constantine, The Temple of Vesta and the adjacent House of the Vestal Virgins.

Running adjacent to the Via Sacra this is where those of influence lived in ancient Rome. This vast 25 acre site sits on one of the most central of the Seven Hills of Rome is said to be where Rome was founded by Romulus after he killed his twin brother Remus – giving Rome its name.  The Palatino is a quiet and relaxing area with less crowds and many ancient ruins including the Emperors’ Palaces; Domus Augusto, Tiberius and Domitian and also the Stadio Domitian, a private arena for the Emperors to watch events and sports.  There are fantastic views of the Circus Maximus from Palatine Hill, where the famous Chariot Races took place.

Avoid queues by buying a combined ticket for the Coliseum, Forum and Palatine Hill from the Palatine ticket office. It is recommended that you either buy a guide to the Forum and Palatine Hill or alternatively hire a guide, local private guides are better value for money than large tourist groups. Be sure to wear comfortable footwear and take refreshments with you as there is little offering in the way of food and drink outlets in this area.

By far the best preserved of all the ancient buildings, the Pantheon was constructed in 27-25 BC by Marcus Vipsanius Agrippa, son-in-law of Augustus as part of the district renewal plan. All that remains of his original triangular structure is the portico at the front of the building. The main part of the building including the impressive 43.3m dome was rebuilt by Hadrian between 118 and 125 AD. The dome was the largest in the world until the 15th century and is still the world’s largest unreinforced concrete dome.  The building was designed as a temple to honour all of the great Roman Gods; it has since been consecrated as a Catholic place of worship. It’s best to visit when it’s sunny to see sunlight fill the interior through the open oculus. Entry is free and you can be in and out within an hour.

A fantastic and rare opportunity to see how the city of Rome has grown over the centuries layer upon layer; enter the 12th century basilica built over a 9th century church built over a 1st century roman house and a 2nd century temple to the cult of Mithras – hugely popular in Roman times. Beneath it all are the foundations of the original Roman Republic and below that can be heard  the trickle of water – a subterranean river. There are some wonderful frescos on view in the basilica and some partial frescos in the 9th century church.