The Down-low on the High Up: Rome’s Monte Mario

The Down-low on the High Up: Rome’s Monte Mario 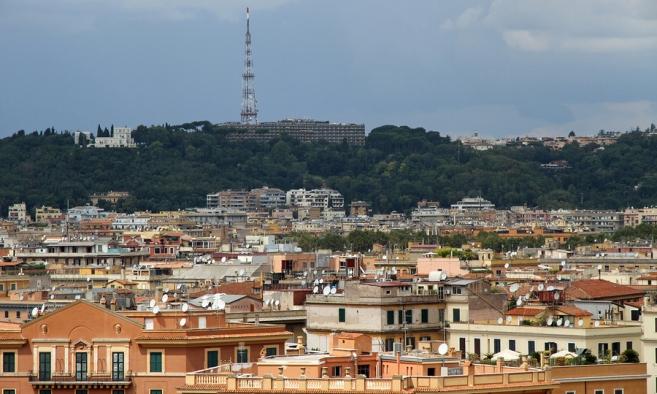 You won’t see snowcapped peaks towering above the Eternal City, but its foundation is anything but flat. The highest point in Rome is at the top of Monte Mario, which is Northwest of the center and can be easily reached on foot from Vatican City or by public transit.  It’s the perfect place to find some peace and quiet above the city, grab some grub or some grappa, and enjoy the view.

You won’t see snow-capped peaks towering above the Eternal City, but its foundation is anything but flat. The highest point in Rome is at the top of Monte Mario, which is Northwest of the center and can be easily reached on foot from Vatican City or by public transit.  It’s the perfect place to find some peace and quiet above the city, grab some grub or some grappa, and enjoy the view.

Rome’s beauty and charms are undeniable, but you’d be hard pressed to argue that it’s not a bit hectic at times in the city center.  A short trip to Monte Mario will take you above the day-to-day noise and bustle, into a quietly regal setting where you can easily see yourself as a modern day oligarch or even a Caesar on his throne, surveying the domain and plotting for expansion. After some nature time, a good meal and a few too many drinks, you’ll be renewed, refreshed and prepared to face the din of civilization that awaits you at the bottom of The Hill.

To quickly, and admittedly, summarize the Wikipedia page: Monte Mario’s name might originate from the fact that a cardinal named Mario Mellini once owned land around the hill.  Later, someone murdered a patrician (think: rich guy) and locals started calling the place Monte Malo (Bad Mountain) which sounds a little bit like “Monte Mario.” Capisce?

If you booked an apartment near Vatican City (or you’re crashing at Jorge’s pad) you can walk to Monte Mario, as only about 1 km (.62 miles for my homeboys) separates the Vatican’s walls from the base of The Mountain.  Alternatively, from the center, you can take Metro Line A to either the Cipro or Lepanto stops, where you can connect with a bus going to the base of the hill.  Of course, the easiest way is to get in a taxi and tell them to take you to Lo Zodiaco, the hilltop restaurant and proprietor of an acclaimed panoramic view.

Avid trekkers, botanophiles and general moseyers can spend hours (or days, depending on walking speed) on the hill’s many winding footpaths, and I recommend budgeting some time to explore and see what you find.

The easily footsore might want to slather on some tanning lotion and take an afternoon nap on the massive grass expanse of the Parco D. Stadio, but a walk along the ridge path to the East of the Parco, at least for a few steps, is mandatory.

Don’t worry if you forget to pack a picnic, because you’ll need to stop by Lo Zodiaco no matter what.  The restaurant stocks whatever you’ll need nutrient-and-intoxicant-wise, and also boasts an eye melting view of Central Rome.

Speaking of views, the Monte Mario Observatory is just a milli-click south of the restaurant.  You can’t se the stars from this observatory unless you’re a real astronomer, but you can certainly check out the Copernicus Museum, where you’ll find a unique collection of astronomical and meteorological tools that will make your inner engineer nostalgic for simpler times.  Also, the buildings are notoriously photogenic, so you’ll want to at least pass through.

Head west from the hilltop to see how the other half lives, in the upscale residential district that shares a name with Monte Mario.  Nestled into the embrace of the hill’s Southwest slopes, you’ll find the luxurious Rome Cavelieri Hotel complex. Bat your eyelashes seductively enough and you might score a pass for a refreshing afternoon in their pool & spa.

On the Cavelieri grounds is La Pergola, Rome’s only 3-Michelin-star restaurant (as they’re very fond of publicizing), with award winning faire and even more panoramic views—but guys, don’t forget to bring your dinner jacket, because you know how the restaurant spares never quite fit.