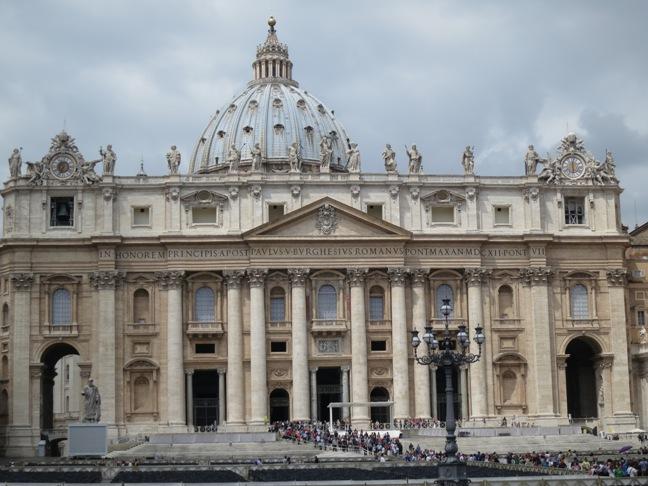 You will not regret a visit to this beautiful and perfectly built Late Renaissance Church. St. Peter’s Basilica is located inside the walls of the Vatican City and to this day retains its sophisticated beauty. Its history and aesthetic interior and exterior make it an incredibly popular attraction for all ages and interests during a leisure or business short stay in Rome.

Built with skill and attention to detail the site of St. Peter’s Basilica will leave you in a state of ‘wow’. The history oozing through every piece of it is absorbing; you can’t help but be intrigued by every bit of stone and art work inside and out. Set inside the Vatican City, by St. Peter’s Square, it stands as one of the largest churches in the world and one of the holiest Catholic sites. If you are staying in our short stay apartments in the Vatican City area then you are lucky to have this amazing building outside your doorstep. But even if you are on the other side of Rome the St. Peter’s Basilica is worth the bus ride and for some is even the reason for their short stay in Rome.

Named after Saint Peter who was one of the twelve apostles of Jesus and the first Bishop of Rome St. Peter’s Basilica is also the burial site of its namesake whose tomb is located below the altar. Underneath the Basilica is the Grottoes where there are tombs of many other popes through the generations. This is also where the tomb of Pope Jean Paul II is located. This lower level can also be visited for free just as the Basilica.

The experience of just stepping foot into the church is overwhelming. The structure being so huge and each piece of the interior and artful objects also being big in size make you feel miniature but in an awe-inspiring way. You then realise the greater power that exists; something so grand and inspiring was made so long ago when man-power was the best tool for construction. A number of big names in art and design including Michelangelo and Bernini were all part of the creation of the church as it still stands to this day.

There are some particular features that you should keep an eye out for during your visit to the Basilica. On entrance don’t miss the Pieta sculpture by Michelangelo on the right hand side, behind the glass window, which depicts the body of Jesus on the lap of his mother Mary after the Crucifixion. If you continue on you will see the Bernini designed Cathedra Petri (‘throne of St. Peter’) which is a large bronze throne with four massive bronze statues. There are about ten thousand square metres of mosaics inside the church and numerous and priceless art pieces are kept in the forty-five altars and eleven chapels. The Basilica’s façade itself is an amazing site with a giant order or columns and two tall statues of the 1st century apostles to Rome, Saints Peter and Paul.

Another must see while at St. Peter’s Basilica is the view from the Dome, which is one of the largest Dome’s in the world. Climb the many steps for a breath-taking 360 degree view of beautiful Rome. This climb is not for the faint hearted so be prepared with comfortable shoes and a bottle of water. The second half is even more difficult with steeper and narrower stairs. If you know you won’t make the climb on foot then go for the elevator instead. Either way you will not regret the entry fee as the views are truly spectacular.  At the top of the Dome you will also find a gift shop, a café, restrooms and water fountains. Walk to the front side of the Basilica for a view of St. Peter’s Square and the huge statues on the façade. Rome’s other great dome the Pantheon can also be spotted so keep an eye out for that.

As one of the world’s largest Basilica you would expect some impressive figures and so here they come: 186 metres in length, 46 metres in height at the central aisle, a main dome height of 136 metres and 42 metres large in diameter, a 114 metre wide and 47 meter tall façade, a surface of 22,000 square metres and 20,000 people can pray in it.

Dress code: both men and women must dress modestly with shoulders and knees covered so no shorts and miniskirts. People do get turned away if they are not suitably dressed.

Don’t be put off by the usually long queue outside of St. Peter’s Basilica as it goes very fast.