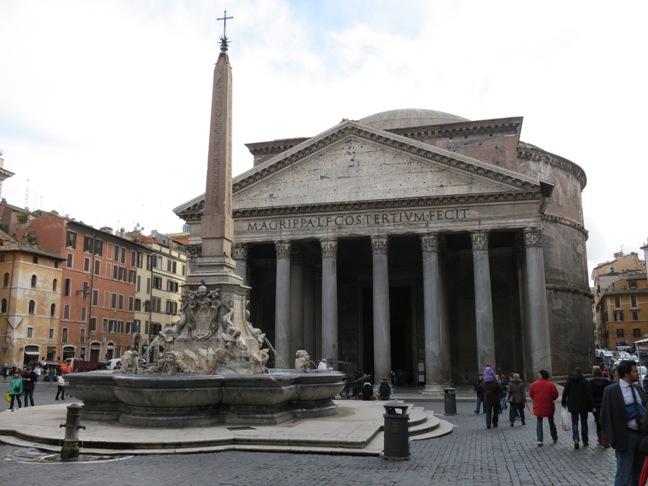 Synonymous with Catholicism, the city of Rome is unsurprisingly saturated with religious establishments, with an incredible collection of over 900 churches awaiting attention. Blending ancient ruins with sacred burial spots and exquisite artistry, the myriad of options can seem quite overwhelming to first time visitors seeking a rewarding snapshot of the capital’s religious prowess. The following list curtails the confusion, highlighting ten of Rome’s most historic, breathtaking and influential holy sanctuaries.

An obvious choice but deservedly so, this Renaissance masterpiece is commonly regarded as the greatest church in Christendom and remains one of the world’s most magnetic structures. Attracting thousands of pilgrims for papal ceremonies and services, St. Peter’s Basilica offers a wealth of treasures to seduce even the most atheistic traveller, which include Michelangelo’s iconic dome and evocative La Pieta, Canova’s remarkable Monument to the Stuarts and Bernini’s staggering altar and baldacchino.

Situated approximately 7 km outside Rome’s central core, the capital’s second largest basilica mercifully evades the tourist masses, providing a dramatic contrast to the likes of St. Peter’s and subsequently enabling a rewardingly peaceful encounter. Originating in the 4th century, this astounding edifice boasts picturesque gardens and cloisters, a highly recommended museum, awe-inspiring mosaics, and a truly tranquil atmosphere, perfect for escaping the hustle and bustle of the city.

This inconspicuous gem dates back to the 1500s and is an absolute must see for fans of the brilliant Baroque master Caravaggio. Three of his finest accomplishments can be found in the Contarelli Chapel, beautifully capturing the life of St. Matthew, which can be illuminated briefly by dropping a coin into the machine aside the canvases, certainly worthwhile to appreciate the collection in its unadulterated glory. The stunning ornate ceiling by Domenichino grants another reason for taking a moment to visit this enriching venue.

Inexplicably overlooked by the vast majority, this exceptional church secretes one of the world’s preeminent trompe-l’oeils, a magnificent fresco fashioned by the Jesuit painter Andrea Pozzo that depicts the entrance of Saint Ignatius into paradise. From certain vantage points, particularly impressive from a central marble disc, this magnificent artwork creates the illusion of a three dimensional dome ascending skywards, although in fact the ceiling is completely flat.

Aside from its spectacular frescoes and a striking 12th century mosaic, this ancient locale deserves inclusion for its extraordinary legacy and its complex three tiered construction. The current building dates back to the early 1100s, although excavations unearthed not only the original basilica of the 4th century directly underneath, but also the remains of an even older structure at the lowest level. A journey through the descending chambers offers an unrivalled sense of history and a fascinating insight into Rome’s illustrious past.

As the name suggests, this noteworthy addition stands out as the city’s primary cathedral, the oldest and second largest, and the official ecclesiastical seat of the Bishop of Rome, that is, the Pope. Despite its influential position, the church surprisingly eludes the crowds, allowing for a more soothing and reverent experience. Displaying breathtaking architecture, an astonishing ceiling and twelve imposing Apostle sculptures, “The Mother Church” cannot fail to astound and resides within easy reach of the sacred Holy Stairs.

One of the world’s greatest constructions, the Pantheon’s unparalleled potency lies in its longevity, recognised as one of the few pre-Christian creations still in use today. Possessing over 2,000 years of history, this iconic monument was initially intended as a temple for pagan gods, although the Catholic Church consecrated the location during the 7th century. Preserving an exquisite interior that includes a striking marble floor and a phenomenal geometric design, this celebrated landmark should not be missed by any first time traveller.

8. Our Lady of the Conception of the Capuchins (Santa Maria della Concezione dei Cappuccini)

An unusual selection yet highly memorable, the draw of this unique establishment lies in its somewhat macabre anthology of “artworks,” assembled using the skeletons of 4,000 Capuchin monks. Showcased in five chapels occupying an underground crypt, the bones have been arranged in an elaborate fashion upon the walls and archways, making this an eerie yet intriguing attraction not for the faint hearted.

Providing a moment of pure serenity in a vibrant local neighbourhood, this irresistible masterpiece is renowned as one of Rome’s oldest and most welcoming churches. With the original foundations dating back to the 340s, the church sports an outstanding level of intactness and a rich history, and remains highly regarded for its intimate ambience and beautiful assortment of biblical mosaics.

10. St. Mary of the Altar of Heaven (Santa Maria in Aracoeli)

The final recommendation can be reached through an arduous climb up a monumental staircase, which rewards visitors with admittance to one of Rome’s holiest sites. Situated atop the peak of Capitoline Hill, the austere facade conceals a decorative interior brimming with artistic wealth, supported by twenty-two mismatched columns recycled from ancient pagan temples. The church was once home to a hallowed statue of baby Jesus, carved from olive wood of Gethsemane and encrusted with jewels, which was sadly stolen in 1994 and has never been recovered.

This compilation is by no means exhaustive and merely grants a starting point for discovering the incessant fortune Rome’s spiritual edifices have to offer. All religious institutes within the capital are free of charge, with additional costs accrued only for entrance to accompanying museums and archaeological excavations. Please remember to dress appropriately and cover shoulders and knees, otherwise access will not be permitted. It is also advisable to consult the website of each church before arrival to check opening times and ensure a hassle free, enjoyable encounter.