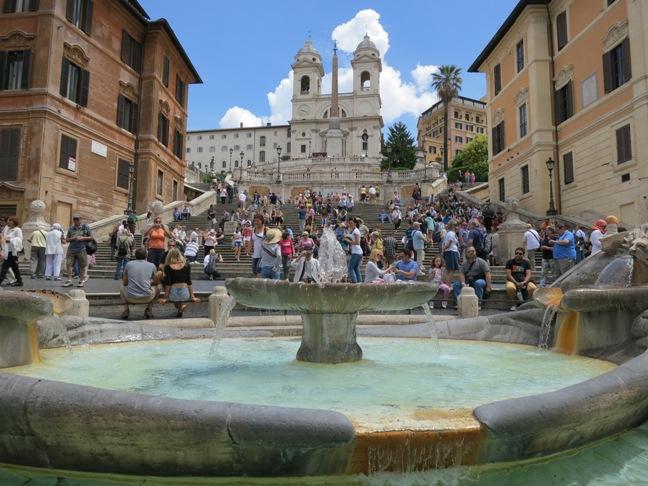 Connecting the bustling Piazza di Spagna with the striking Trinite dei Monti Church, Rome’s Spanish Steps are an attraction not to be missed whilst visiting this remarkable city.  Regarded as one of the area’s busiest meeting places, the impressive stairway attracts visitors from all over the world.

Often a bustling hive of activity and used as a popular meeting place within the city, Rome’s renowned Spanish Steps are definitely worthy of a visit.  Consisting of 137 steps and set over 12 flights, the stairway was designed in 1723 by the architect Francisco de Sanctis and has been restored several times since its creation.  Many Hollywood films feature the Spanish Steps in their scenes and they have also been used in the titles of several chart topping songs throughout the years.

The steps begin at the well-known Piazza di Spagna (Spanish Square), which took its name from the Spanish Embassy to the Holy Sea that was once located there.  Lined with striking buildings, including the former home of the much-loved poet Keats, the square also boasts an iconic fountain named Fontana della Barcaccia.  The flooded boat design of the fountain was created to symbolise the flooding of the River Tiber in the late 1500s, which resulted in a small boat becoming stranded in the neighbourhood once the waters had receded.

By climbing the steep stairway, which has been referred to as the widest of its kind in Europe, you will reach the magnificent Trinite dei Monti Church, which is positioned upon a small square offering breath-taking views of the surrounding area.  The church itself was built in the early 1500s and replaced a small chapel which originally stood on the site.  Construction took several decades before work was completed in 1585.  Trinite dei Monti Church is renowned for its two bell towers, together with the striking obelisk which stands just in front of it.

The Spanish Steps, complete with the Piazza di Spagna and the Trinite dei Monti Church, are an attraction that is certainly recommended when visiting this wonderful city – especially during the spring time, when the stairway is adorned with delightful flowers which bloom with vivid colours.