San Giovanni in Laterano – The Mother of All Churches

San Giovanni in Laterano – The Mother of All Churches 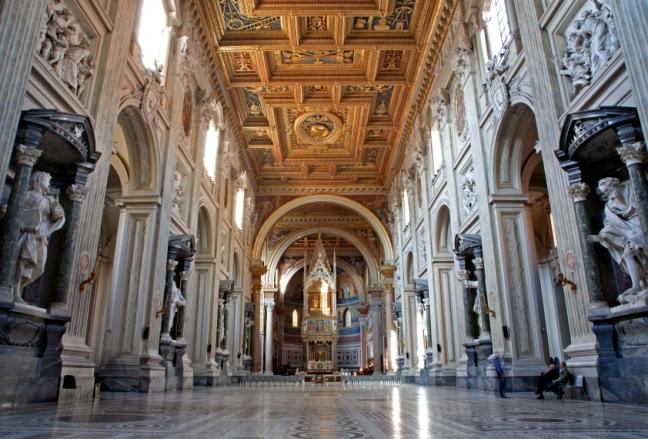 Housing over 900 churches, Italy’s enriching capital boasts enough holy establishments to last you a lifetime, making deft itinerary choices something of a headache. However, visitors desiring an introduction to Rome’s notorious religious wealth should certainly not miss the most influential sanctuary of all, San Giovanni in Laterano; the Catholic Cathedral of the diocese of Rome.

The Archbasilica of Saint John Lateran is renowned for its colossal size, incredible history, exquisite furnishings and perhaps most prominently as the official ecclesiastical seat of the Bishop of Rome. Ranked first amongst the city’s four papal basilicas, this monumental landmark remarkably remains an integral place of worship, having originated at the hands of Constantine as early as AD324.

The existing site was initially occupied by the palace of the Laterani family before the mansion was transformed into barracks for the Imperial Guard and eventually developed by the great Roman Emperor as the capital’s first Christian cathedral. Dedicated to Christ the Saviour in 318, the church subsequently suffered several disasters, including three fires and a devastating earthquake, and underwent numerous revamps throughout the centuries. The current aesthetic can be mainly attributed to Francesco Borromini, an architect selected by Pope Innocent X for the 1650 Jubilee refurbishment, although the neo-classical facade was completed by Alessandro Galilei in 1735.

Despite its status as the capital’s official cathedral, San Giovanni offers a welcome contrast to its much more popular rival, St. Peter’s, by mercifully evading the jostling crowds. This lack of commotion enables a more tranquil and indeed rewarding encounter, allowing you to absorb the serene atmosphere and leisurely appreciate the extraordinary treasures on display.

Some of the basilica’s unmissable highlights include the imposing bronze doors removed from the Roman Forum, the beautiful 15th century mosaic floor, an original albeit incomplete fresco by Giotto, the elegant, Gothic baldachin, and the Altar of the Holy Sacrament, which contains a cedar table reputedly utilised by Christ during the Last Supper. The twelve niches incorporated into the nave were originally left abandoned until Pope Clement XI instigated a competition open to the premier sculptors of late baroque Rome to create seven foot statues representing each of the Apostles, resulting in the striking artworks still available for admiration today.

Another notable feature, undoubtedly worthy of the entrance fee, is the peaceful oasis of the 13th century cloister, the single surviving remnant of the former Benedictine monastery. This timeless setting comprises of a verdant central space flanked by a beautiful series of twisted columns of inlaid marble, an idyllic environment for indulging in a harmonious moment of reflection or meditation. Aside from such internal wonders, the basilica also grants convenient access to the Scala Sancta or Holy Steps, a white staircase believed to have borne the footsteps of Christ during his ascent to the pretorium of Pilate.

San Giovanni in Laterano opens daily from 7am until 7pm (6pm during winter). Entrance is free although additional charges offer admission to the cloister and museum. Visitors are advised to wear suitable clothing that covers knees and shoulders.