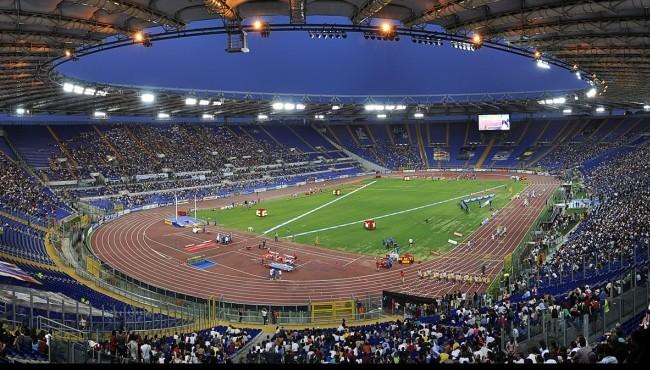 The City of Seven Hills do not have seven stadiums, but it has a hand full of history in sports and it shares its boundaries with two great teams in Italian and European scene: A.S. Roma and S.S. Lazio. At the top of this, and to spice up their rivalry, both of them play in the arena: the Stadio Olimpico, a UEFA Elite Stadium, where besides football, there are other events such as rugby, athletics and concerts. Let us go and find out more about the teams and the stadium of Rome.

Once the capital of a huge empire, spreading from Far West to Far East, Rome is today a capital of culture, fashion and football. The latter is part of the life of the romans. And do not think it is easy to choose a team to support. The Eternal City shares its territory with two fabulous teams: Societá Sportiva Lazio, or simply Lazio, and Associazione Sportiva Roma, or commonly known as Roma. Both of them have accomplished great deeds, including important trophies and famous players. To spice this up a little more: both of the clubs play in the same stadium – the magnifique arena of Stadio Olimpico.

Let us start with Roma. The association itself was founded in 1900, even though the football section only made its way in 1910. The tiffosi and other supporters know it as I Giallorossi (Yellow-Reds), La Maggica (The Magic One) and I Lupi (The Wolves). And indeed, these nicknames fit perfectly with the team and the city: the emblem is a wolf and the letters ASR (the initials of the club) with gold and purple-red background, representing the Roman Imperial dignity.

In its history, A.S. Roma had already its ups and downs, but the achievements are quite impressive: in the 60s, the golden decade, the Yellow-Reds won a UEFA Fairs Cup (former Europa League) in 1961, and two Italian Cups, one in 1964 and another in 1969. In total, Roma won three national championships (1942, 1983 and 2001), nine Italian Cup trophies and two Italian Super Cup. In other hand, at European level, Roma only won a Fairs Cup, even though it made presence in two other finals, in 1984 and 1991. The international curriculum does not seem to be impressive, but this team reserves always a surprise to those who face them.

Roma has also a story to tell about players. Which football supporter does not know Francesco Totti? This top player of the squadra azzurra (Italian National team) made a long career in A.S. Roma, totaling 19 seasons, 610 games and 262 goals. Other players also marked the success of this team: “Ciccio” Cordona and Fabio Capello in the 60s, Bruno Conti, Carlo Ancelotti and the striker Roberto Pruzzo in the 80s, among many others.

Let us move to the sky blue Lazio. Curiously, this club had been founded in the exactly same year as Roma (1900), and the football activity started also in 1910. The followers of Lazio know this team as biancocelesti, representing the club’s colours. Other nicknames are le Aquile (the Eagles) and Aquilotti (Young Eagles), representing the eagle on the top of the emblem. The colours, sky blue and white, were inspired in the national emblem of Greece. This is due to the fact that Lazio is a society with different sports, thus expressing the ideal of the Ancient Olympic Games in the old Greece.

In history, Lazio has its more meaningful conquers in the last two decades: a national championship in 2000, an UEFA Cup Winners’ Cup and UEFA Super Cup in 1999, several Italian Cups, and an UEFA Cup final in 1998. These were definitely the golden years of the biancocelesti. In total, Lazio has 2 Serie A, three Italian Super Cups, six domestic Cups, one UEFA Cup Winners’ Cup and one European Super Cup. As for the players, Lazio still counts with one of the top players in the Italian football, Simone Inzaghi, which is the all-time top scorer of Lazio in European competitions. Other players who made this team enter in the hall of fame of the Italian and European clubs are: Silvio Piola (148 goals scored) and more recently, Tommaso Rocchi.

Apart from the rivalry between these two roman teams, there is something that bonds them: the Stadio Olimpico. This arena was first built during the fascist regime of Mussolini, in 1937. The stadium reached a maximum capacity in 1953, with 100,000 souls being able to watch the games. But the stadium only got the nomination of Olympic Stadium in 1960, during the Summer Olympics of that year, hosting both opening and closing ceremony. With the FIFA World Cup of 1990, the stadium got an opportunity of having an extensive improvement. And last but not least, the stadium got a restyling in 2007 for the UEFA Champions League Final in 2009. Nowadays, the Olympic Stadium of Rome is considered as an UEFA Elite Stadium. It is the largest sports facility in Rome and it is the stage of different sports (football, rugby and athletics) and it receives different events, including concerts.

As you just saw, Rome has a very strong sport side, being attractive for anybody to watch a nice football game of Serie A and be part of the tiffosi, or simply by going to a concert in this amazing arena. Spread all over the city you can find several apartments of Rome Apartments, ready for your relaxation during your stay in the Eternal City. Give the start kick and come to Rome!