Piazza Navona – Seed the imagination with a healthy dose of architectural theatre.

Piazza Navona – Seed the imagination with a healthy dose of architectural theatre. 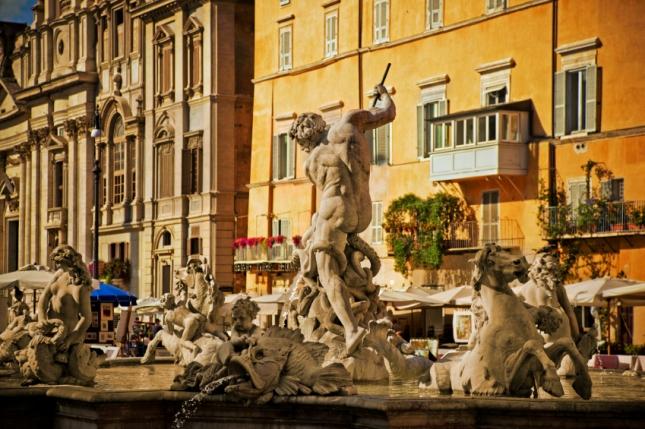 An amble through the streets surrounding Piazza Navona seeds the imagination with a healthy dose of architectural theater.  Forming a rough triangle between Ponte Cavour, Ponte Amedeo and Piazza Navona – I especially recommend our apartments in this area for those new to Rome.  Being within the ancient city while also among sumptuous, Baroque palaces stimulates the mind to induce a cinematic feeling of living in a film.  Here are some of my favorite alcoves that distinguish this neighborhood of heady grandeur.

Let’s begin at Piazza di Pasquino, near the southern end of Piazza Navona, where the talking statue, Pasquino, stands.  Romans have been attaching anonymous sayings on this effaced Hellenistic statue since 1501.  I enjoy stopping here to try translating some of the sayings, which usually are humorous indignations.  Similarly, two other statues, elsewhere in Rome, have been known to develop dialogues with each other – namely, Babuino (Via del Babuino) and Marforio (Via del Campidoglio).

From Pasquino, I would go to either admire the renowned palaces and monumental fountains of Piazza Navona or to continue walking down Via del Governo Vecchio, then up Via dei Coronari for antique shops, handmade boutiques, art galleries, and dens of vintage and designer clothing.  Bypass the traffic of Corso Vittorio Emanuele, whenever possible.  Except, that is, for a rest near Chiesa Nuova with its giant green doors, Convent of the Oratorians, and Borromini’s clock tower, which deserves one’s full attention and appreciation.

Heading east of Piazza Navona, I usually step inside the calming courtyard of the Palazzo della Sapienza, at Corso Rinascimento 40, to relax my mind on the way to, say, Biblioteca Angelica at Piazza Sant’Agostina; Italy’s second oldest public library, open since 1609.  This cozy, reading room is the perfect place to tuck into a book during rain spells or to quickly taste a Baroque room of learning.  From there I may go to the Museum of Palazzo Altemps, at Piazza Sant’Apollinare 46, to contemplate Classical sculptures and to learn about ancient deities.  Alternatively, there are three huge Caravaggio paintings free to view at the French national church, San Luigi dei Francesi.  I cannot recommend visiting this church enough, the interior marble alone is worth witnessing with its large symmetrical patterns.

Once night arrives I recommend checking out Caffe Della Pace on a corner seemingly built by poets.  Via Della Pace disperses an infectious sentimentality fluttering beneath the peaceful sentinels of an arch and a bell tower.  Particularly popular among Rome’s professional artist community, the café is a fine place for chance encounters.  Indeed, the entire neighborhood feels like a work space for famous artists who open their studios as impromptu galleries to display their work.  Stop in, see their current projects and say hello.  Some even paint in full view of the passing public.

A fun evening walk is from Piazza Navona along Via di Millina Tor, all the way to the pedestrian Ponte Sant’Angelo (known as Hadrian’s Bridge in ancient times) with its capital views of the bending riverside and a dead-on view of the imposing Castel Sant’Angelo.  I go there to study the bridge’s beatific statues with a sketch pad ready for meditations.  One of my favorite things to do in Rome is finding public statues to draw and to train the eyes – this practice is a doubly pleasant way to meet people.  Better yet, bring a friend along with some sandwiches, suppli (fried rice croquettes stuffed with mozzarella), and red wine.

Due to Rome’s overwhelming collection of inspiring features, a common approach is to go directly between places, over-extending oneself throughout the entire city.  This way misses out on knowing well a site’s actual neighborhood.  Instead, I suggest committing to a single neighborhood per day or only one area per week, preserving other neighborhoods for later visits.