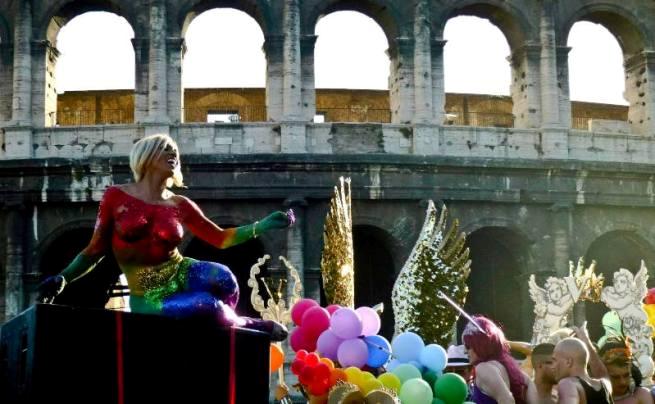 In summer, Gay Village takes over a huge site of historic parkland and transforms it into an outdoor entertainment complex with bars, two dance floors, an open-air gym, an exhibition space and an outdoor cinema. There’s live music, theatrical performances, film screenings and a whole lot more!

It doesn’t matter that the Vatican sits just across town or that Italy does have a reputation of a largely homophobic country – during those long and hot summers Rome becomes home to one of Europe’s largest LGBT festivals entitled Gay Village and lasting almost three months each year.

The festival usually runs from June to September, with exact dates changing each year, and with a growing list of events and activities taking place on Thursdays, Fridays and Saturdays for approximately 10 weeks every summer. The festival started back in 2001, and has recently become a recognized and quite popular part of the city-sponsored initiative Estate Romana (Roman Summer Festival) which includes numerous concerts, film screenings and other cultural events throughout the city, mostly in outdoor spaces. Estate Romana itself started back in 1977 and is one of Rome’s most important cultural events as well as touristic attractions in summer months, providing both cultural and popular entertainment activities both for local residents and the many tourists who flock the city during the summer. Gay Village is perhaps the fastest-growing part of Estate Romana, attracting more and more visitors each year with more than 300,000 people attending the Gay Village 2012 which included theater and live music performances, dance parties, a film festival and even an open-air gym.

Gay Village has changed a few location in the past years but recently it has found its place in the Parco del Ninfeo on Via delle Tre Fontane in the EUR neighborhood of Rome, which now seems to have become a more permanent residence with this year’s festival taking place at the same location. The EUR neighborhood is located south of Rome’s center and is not considered a touristy neighborhood with mostly mixed residential and business buildings. To reach it you can take the metro Line B and get off at the EUR/Magliana stop which is closest to the entrance or alternatively you can also use the EUR/Palasport or the EUR/Fermi stops located within a walking distance. There are several bus lines that also go to this area, including 706, 707, 717, 765, 771, N2 and N3.

If you show up between 8 and 9pm you will enter for free, but should you be fashionably late you will have to pay an admission fee which will set you back €8 on Thursdays, €15 on Fridays and €18 on Saturdays. The good news is that the admission fee does include a free drink. The bad news however is that it doesn’t include special events which will charge a separate admission fee.

Events at the festival really are abundant and most will be free, except for those few big shows and parties that feature world-renowned performers, entertainers and DJs. On the menu you will find concerts, comic and musical shows, theater performances including a lesbian-only theater, an LGBT cinema festival, many sports activities (including an open-air gym), Mr Gay Contests (Mr Gay Europe and Mr Gay Lazio), a literature section, open air bars and much more! Be sure to check out the festival calendar on the official Gay Village website (www.gayvillage.it) which is mostly in Italian (in fact, a strange mix of Italian and English) but easy enough to navigate and get the information you need so you can plan your visit. You can also subscribe to their official facebook page and get all the information and the latest updates right on your facebook newsfeed. Again, their posts are mostly in Italian but Google translate does wonders if you don’t speak the language.

Keep in mind that the festival has been attracting many visitors in the last couple of years so if you plan to attend it’s good to book your flights in advance and check out your transportation options early, particularly focusing on your way back from the festival because the metro shuts down at 11:30pm (00:30 on Saturdays) and the night bus service is very limited. It is therefore a good idea to carefully choose where to stay in the city so you can avoid the costly taxies or to make your way to and from the festival as easy as possible. Being one of the busiest tourist destinations Rome is full of hotels located throughout the city. Its popularity among tourists however does result in somewhat overpriced accommodation. A good option you should consider is a short-term apartment rental with apartments available at various locations, often costing less than hotels. By renting an apartment not only will you be able to choose your location but also the apartment size, comfort and price-range. On top of that, your privacy will be uncompromised, while you’ll also have a chance to do some home-cooking for yourself and your potential guests. After all, Rome is a big city and you never know – you very well might meet someone you’d like to invite back home for a meal or some time alone.