Living in the youthful neighbourhood of San Lorenzo

Living in the youthful neighbourhood of San Lorenzo 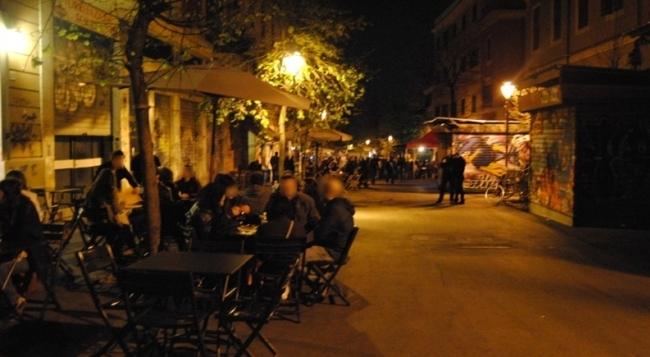 I lived in this less visited district for about half a year – on Via degli Umbri to be exact – and enjoyed some favorite memories there, sharing food and wine with friends on rooftops, chatting with Italian and Erasmus students late into the night.  This is one of Rome’s most social areas – especially during Friday and Saturday nights, when crowds converge in front of the church bell tower at Via degli Umbri and Via dei Volsci.  A popular meeting space for students who also end the night here with a glass of wine and slow growing conversations.

A short walk to Termini Train Station (a major bus hub), buses go to Largo Argentina (downtown) or any other area one may wish to arrive. San Lorenzo is even in walking distance to the center of Rome, if one has the will and the time.  I would say that Rome is best familiarized over long walks and would recommend arriving ready for miles of beguiling, amusing walks.  Our apartment rentals in San Lorenzo benefit from being near to bus, tram or metro.

This community also strongly identifies with the dignity of workers and students that infuses a consistent humility yet vibrant lifestyle.  On any random day one may come across surprising manifestations of this deeply ingrained character. One day a boxing ring is set up over an entire street intersection as a tournament unfolds. Some nights there are movies projected down the middle of Via dei Volsci with free seating for all to enjoy.  The record shops, fashion boutiques and pubs doubly serve as mouthpieces for current events and local fervors.  This is a socially aware place with a hipster contingent contrasting against the more traditional Italian lifestyle.

However, some permanent features reveal San Lorenzo’s turbulent past. The little park on Via Tiburtina Antica contains a monument listing the names of all the residents that perished during the American bombing of San Lorenzo in WWII, the only portion of Rome that was bombed.  These air attacks disrupted the neighborhood’s layout and to this day one still sees old walls and oddly shaped buildings re-assembled incongruously or left in solemnly distorted forms.  This unsettling epoch reminds the residents of the disastrous effects of war and to a recent re-composition unique even within Rome’s perpetual layering of time periods.

While attempting to live as an artist in San Lorenzo, I had shared an apartment with four University of Rome students. When they were at morning class, I would walk the neighborhood in search of visionary inspirations.  One of my frequent stops was to Cimitero del Verano which provided a serene space to relax and reflect.  Often times I went there to draw classic Italian cypress trees and statues and be reminded of impermanence.  Other times, I would walk to Porta Maggiore (a mortuary tribute to a wealthy, ancient Roman baker) to draw fragmentary aqueducts mixed with city traffic.  Also, the open air farmer’s market at Largo degli Osci was a regular place to grab some food for making meals at home.

San Lorenzo, as one of Rome’s most youthful, bohemian-flavored domains has this quality in common with its southern neighboring district called The Pigneto (meaning: pine forest).  I’d say that staying in San Lorenzo is most particularly suited for those who already know Rome’s historic center and who wish to branch out to areas where young Italians live and study.  Most alluring during autumn, this side of Rome offers visitors and residents alike a hip, energetic focal point outside the city’s glorified center.