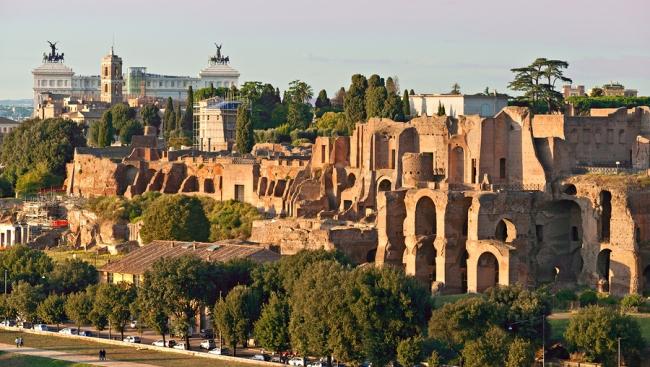 Come base a short stay in Rome’s ancient city, near the Circus Maximus, and be set for some lasting, relaxing memories of its founding features. This prime area is deeply influential history and relaxing scenes among monuments of that past.  In addition to a concentration of serene surroundings, Circus Maximus is a place to rest, to play and to center you in ancient and in modern Rome.

What remains of the once culturally vital Circus Maximus is an open field in the shape of a racing track with the faint stamp of an ancient arena that now forms a unique public park. Stretching over two football fields in length, this enormously long, grassy oval outlines the stadium that perhaps sat as many as 200,000 spectators. Most of the original stone structure is gone however – ransacked for building materials – but the spina (island wall dividing the track) survives as a pathway.

The park itself seeps below a line of cypress trees that sway against the stark spectacle of the Palantine hill.  Atop these slow crumbling precipices is the emperor’s barren palace which overlooks the Circus Maximus, the river Tiber, the Coliseum, and the Roman Forum. Between these points is an area of historic singularity – the empire’s symbolic head – the caput mundi or “head of the world”.

Built around 326 BCE, this chariot stadium became a prototype for subsequent race courses. The final recorded use was under Totila the Ostrogoth in 549 AD, well after Rome’s collapse. By then the aqueducts were already cut and the population down to an estimated 5,000 people.

In its prime though, the Circus Maximus was notorious for licentious gatherings and gambling. The stadium’s purpose was to satiate a Roman appetite for chariot racing and public promiscuity. Unlike the Coliseum, where the sexes were segregated, Ovid records that at the Circus Maximus there was “no call for the secret language of fingers; nor need you depend on a furtive nod when you set upon a new affair.”  Since attending races was an integral part of Roman life, so too was setting upon new and blatant love affairs.  This seems to have been where Romans went to do both.

The Circus Maximus serves as a mass gathering point to this day. In recent memory, Italy’s World Cup celebrations converged and spread out across here. Music festivals occasionally happen here too. Picnics though are the more common occurrence, along with people stretching out their legs, runners and a healthy dose of people watching. Children also let loose here.

One finds within an easy walking distance all these distinguishing characteristics: the flowing aqueducts, the Coliseum, the Forum of Trajan, Marcellus Theater, the Capitoline and the Palantine hills, the Baths of Caracalla, Piramide / Testaccio, the river bank and Trastevere. There is also a metro stop at Circo Massimo for going further afoot to say, Eur. Both metro lines intersect at the main train station, Termini, where to airport train connects to the city.

For one’s next trip, unwind body and mind among the age-anointed remnants of ancient Rome.  Plan to stay near Circus Maximus, where the emperors reigned and where the populace now relaxes amid such fallen extravagance. Within a close proximity to there are the best focal points of ancient Rome. Our apartments near the Circo Massimo metro station combine a solid balance between optimal convenience and content. This area is the ancient city’s mainstay of architecture, politics and culture. A simple visit here will impart an indelible set of fine memories about the glory of Rome.