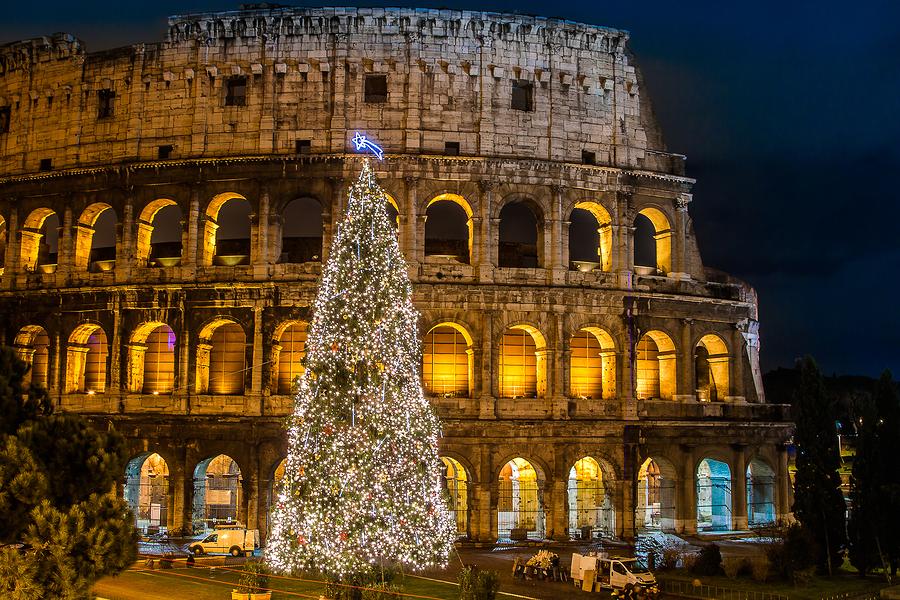 Central Italy’s sunny climate may not conjure images of the ice rinks and snow-covered streets that we’ve come to associate with the holiday season, but Rome is arguably the original city of Christmas, having celebrated the first recorded mass in 1300 AD. Today’s Rome hasn’t lost the spirit, and you’ll find a myriad of ways to celebrate the holidays in the Eternal City, from 3,000 nativity scenes to midnight mass with the Pope.

Ancient Rome played a varying and not always positive role in the history of Christianity, but by the middle of the first millennium AD the nation had accepted the religion as official and immediately, I assume, began preparations for the Christmas season. Rome has several historical claims to Christmas fame: it’s the first city to celebrate Christmas (having held a mass in the 1300s); it’s home to the oldest permanent nativity scene; and it surrounds the Catholic Vatican city-state, arguably one of the most enthusiastic catalysts of Christmas parties worldwide. After you’ve digested several competing encyclopedias and the major books of Judaism, Christianity and Islam, you might have an idea of how intertwined religion is with politics and culture in this little spot. Pat yourself on the back and take a break by cruising the world-class Christmas market in Piazza Navona, where you’ll find all the candies and souvenirs you’d expect, plus a stellar nativity scene and a plethora of stalls hawking gift-size models of same.

Speaking of nativity scenes, or Precepi, the world’s oldest one is currently on display in the museum of the Santa Maria Maggiore Basilica, across the park from the Colosseum. Parts of the scene, including Joseph and the donkey, date all the way back to the 13th century, so don’t sneeze or they might have to spend another 500 years restoring it. Rome knows a good idea when it sees one, so it’s no surprise that the city opened a museum devoted to Precepi in 1953, which now holds over 3,000 pieces. While many museums’ hours are sporadic at best during the holiday season, this one, thankfully, is an exception.

Spend your time as you like in the days leading up to Christmas Eve, but when the clock strikes midnight on December 24th, there’s no better place to be than in St. Peter’s Square listening to the Pope give midnight mass to you and the rest of the Catholic world. If you look the part, you might even have your face broadcast on live television to millions of Catholics around the world. Tickets are free and you can get them from the jester-like Swiss Guard, but you’ll have to show your devotion by waiting in line to get them.

To make the most of your Roman holiday, it’s best to stay near Piazza Navona or Campo de’ Fiori to put most of the city’s festive attractions within walking distance. We offer a bouquet of apartment rentals in the area for savvy travelers looking for a central location. Book your apartment today and get ready to celebrate with the guys who invented Christmas.