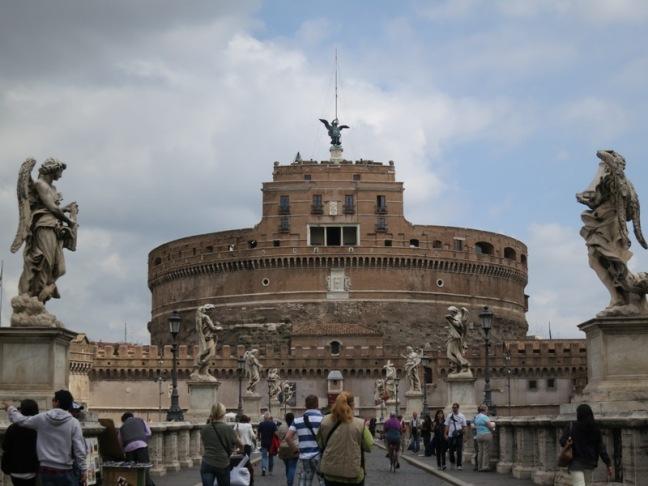 A must see for military and history enthusiasts and especially for fans of Dan Brown or even Assassin’s Creed, the monumental Castel Sant’Angelo towers above the Tiber River in Rome’s ancient core, offering visitors a fascinating insight into the capital’s opulent heritage. Otherwise known as the Mausoleum of Hadrian in reference to its original function, this cylindrical landmark has enjoyed a rich and colourful past spanning almost 2,000 years and still remains an integral and worthwhile attraction amidst a city bursting with treasures.

Assembly of this colossal venue began as early as 123AD at the hands of Demitriano, an architect commissioned by Hadrian to construct a fitting tomb for the emperor and his family. Completed one year after his death in 139AD, the mausoleum dominated the city’s landscape, comprising of three overlapping structures enveloped by a circular facade and topped by a towering effigy of Hadrian himself. The scenic Pons Aelius Bridge concluded the build, a beautiful crossing that currently supports several impressive Baroque statues added during the Renaissance.

At the erection of the Aurelian Wall, the vault became fortified and eventually transformed into a military stronghold for fleeing popes, with a secret passageway established between the castle and the Vatican for a swift and secure escape route in times of danger. Sant Angelo subsequently served as a prison for over two centuries, detaining such illustrious figures as Giordano Bruno and Benvenuto Cellini, and was also the site of grisly executions before its conversion into a museum at the beginning of the 20th century.

The fortress is crowned by a bronze sculpture of the Archangel Michael, an 18th century replica of the original marble creation on display within the compound. Legend has it that Saint Michael descended upon the mausoleum in the year 590 and sheathed his sword in a representative gesture denoting the end of a devastating plague that had wreaked havoc across the city, hence the establishment’s present title.

With such a vivid history and a complex design, the Castel Sant’Angelo offers a world of discovery for all members of the family, boasting numerous highlights including an original spiralling corridor, the decorative papal apartments, an underground torture chamber, a superb collection of artefacts, and of course the Passetto di Borgo. This clandestine passage is only open during the summer months or accessible by special appointment, so please check the website before your visit to avoid disappointment.

One of the attraction’s greatest draws is in fact its panoramas, which can be viewed from a delightful upper terrace that affords spectacular vistas across the horizon, particularly breathtaking as the sun sets on the Eternal City. Rousing entertainment is provided during summer evenings and the resident cafe serves a delectable cup of coffee, granting a perfect end to an enriching afternoon in one of Rome’s most remarkable monuments.

Castel Sant’Angelo opens from Tuesday to Sunday, 9am until 7.30pm, although the venue closes at 2pm from October until March. Admission fees are currently 10 Euros but concessions are available for visitors travelling with city discount cards. For more information, consult the castle’s website at castelsantangelo.com (which unfortunately is only provided in Italian).