All roads lead to Rome – the gay ones too!

All roads lead to Rome – the gay ones too! 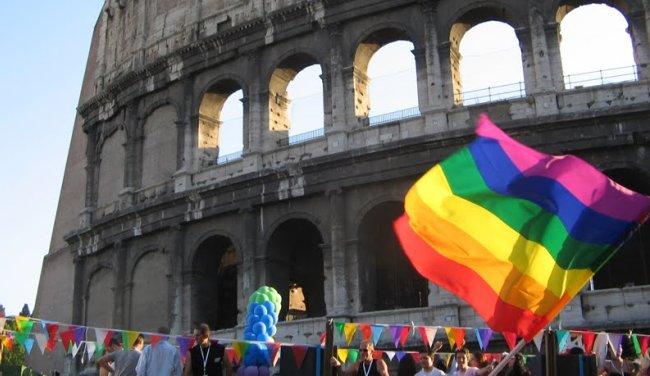 Despite Italy’s reputation as a homophobic country which indeed is true in many ways, Rome does have something to offer to LGBT visitors besides its museums and cultural venues. The local scene is relatively small when compared to other capital cities, but still very vibrant and most importantly – on the rise!

Although homosexuality was widely practiced and accepted in ancient Rome, with records of marriages between two men (no legal value but frequently celebrated) further emphasizing Roman views of homosexuality, today’s Italy does not seem to share the same views. In fact, Italy remains one of the few countries within the European Union that do not legally recognize same-sex couples despite the fact that several bills on civil unions or the recognition of rights to unregistered couples have been introduced into the Parliament in the past twenty years – yet none have been approved.

Be it because of the local mentality, or because the Pope power is strong even outside the walls of the Vatican City, or for other reasons – Rome doesn’t quite come close to other European capitals when it comes to the LGBT scene and nightlife. But fortunately, as it’s usually the case, things are looking up and Rome has seen some significant transformations in the last few years. In fact, Rome and Italy in general are on a clear path of embracing the more liberal European values including a positive attitude towards the LGBT community. The estimated one million people who attended the EuroPride 2011 which took place in Rome, together with the new generation of more open and self-confident gay man that fill the now well established Gay Village Summer Festival are a true testament of these changes. So despite the fact that Rome does not possess the diversity or the high spirits of the LGBT scene like some other European cities – it is in fact a perfect LGBT travel destination as you get to witness first-hand the evolvement of a society and the final steps in accepting sexual and gender identities in all their diversity!

The city is nowadays mostly safe and welcoming, but public display of affection is best reserved for the more “gay areas” in town. Although Rome doesn’t subscribe to the gay village concept (instead it has a summer festival with the same name) the highest concentration of LGBT bars, restaurants and clubs is found in the Via San Giovanni (also known as the Gay Street), just opposite the Colosseum. The other venues are mostly scattered around the city, a concept that many people find refreshing as you get better acquainted with the city, exploring its different parts while doing your LGBT bar-hopping.

Pretty popular is “The Coming Out” – a lively bar at the beginning of San Giovanni Street right in front of the Colosseum. It is a good place to start your evening with a couple of drinks but should you want to party hard – it’s best to head towards Qube Club (Via di Portonaccio, 212) and experience their famous Friday evening Muccassassina parties. Keep in mind that on other nights this is a more straight (although alternative) club. Other options include a mixed-crowd and quite popular Radio Londra (Via Monte Testaccio, 67) or L’Alibi, a big and popular multi-room club with an upstairs terrace, located in the same street (nr 40) and mostly visited by gay boys. Rome unfortunately does not have a lesbian-only club or even a bar, but a few cafés (i.e. in San Giovanni Street) appear to be more geared towards women. Luckily, the Joli Coeur Club (Via Sirte 5) does host a lesbian-only night on Saturdays.

Of course, there are quite a few gay saunas in Rome as well as dark-room clubs. II Diavolo Dentro and Frequency are the most popular dark-room venues, while Europa Multiclub, Apollion and Mediterraneo are the busiest gay saunas in town. Keep in mind that a membership card is required for all gay cruise bars and saunas in Rome. This is most often the Arcigay UNO CLUB card which is also required for some of the gay parties. You can usually acquire the card at the entrance of the venues that require it by showing your photo ID. The card will cost you 8 € and is valid for 3 months.

The Gay Pride in Rome is an annual event that takes place in the month of June with a path that usually starts from Piazza della Repubblica and ends at Piazza Venezia. June is also reserved for the LGBT Film Festival which started several years back and takes place in the historic cinemas Acquila, in the district of Pigneto which is famous for being frequented by artists.

As for accommodation, Rome has several gay-friendly hotels and these include the Scalinata di Spagna Hotel, Seiler Hotel, UNA Hotel and iQ Hotel. All are centrally located but also somewhat pricy. Short-term apartment rentals are a great and often cheaper alternative, and many apartments are located in the very center of the city. They not only offer complete comfort and cooking options but also full privacy and an opportunity to take someone “home” with you after that night out in the club.