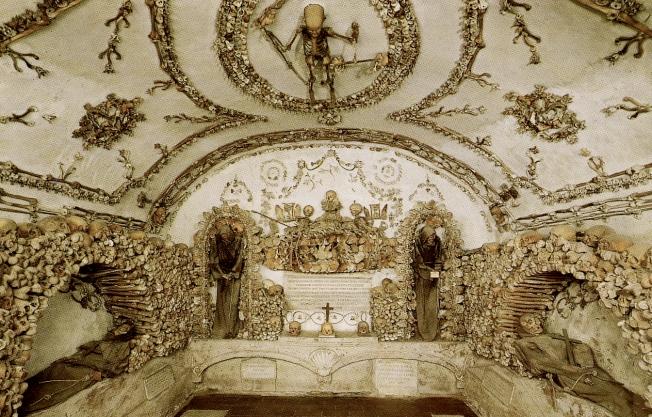 Via Veneto’s macabre church, Santa Maria della Concezione dei Capuchins, purposes a lasting meditation on death.  Among the city’s ruins, reliquaries, crypts or catacombs, this place may prove to be the most potent momento mori in Rome.  Here one finds the bones of over 4,000 Capuchin monks re-assembled as elaborate interior ornaments.  In stark contrast to the Veneto’s glamorous reputation as a celebrity playground of smart, spacious cafes, this unforgettable Capuchin church reminds us, rather, to live more with the inevitable in mind.

During the declining days of late autumn, from the famous fountain roundabout of Piazza Barbarini, I walked alone up the Via Veneto and soon arrived at this small Capuchin convent with a parallel set of half-circle steps.  The church contains chapels with large paintings: one of the Archangel Michael, sword drawn with his foot on Satan’s neck, another is of the transfiguration of Jesus.

One must donate one euro before descending into the crypt.  Immediately upon entering, I was startled by the acrid scent of bones.   Dim lighting then gently revealed small vertebrae lining an entire chandelier.  Piles of yellow skulls are arched over a hooded skeleton, looking like Death itself, seated beneath symmetrical patterns of lanky femurs nailed across the walls and other decorous oddities comprising fingers and toes, ribs and hips spanning even over the ceiling.  The crypt contains six individually styled chapels of such wild, grotesque artwork.  It only takes about 15 minutes to file through the ossuary but the impressions are seared well into memory.  Out of respect to the monks, photos are not allowed and one must dress conservatively.

Of further note, the Marquise de Sade visited the crypt in 1775 and commented in his travel journal “I have never seen anything more striking.”  Also, Mark Twain wrote five pages about it in his book Innocents Abroad, calling the crypt a place of “picturesque horrors”.

The church itself dates from 1626, about 100 years after the order of the Capuchin monks arose as ultra ardent devotees of St. Francis of Assisi.  At first, the Catholic Church disagreed with their approach and attempted to arrest them.  For years, they went into hiding with the Camaldolese friars, who provided them a haven until the Pope’s eventual approval.  In gratitude, the Capuchins adopted the Camaldolese’s beard and hood (cappuccio), from which they derived their name.  They are also known as the hermit friars, as opposed to the observant friars of Franciscans, and live as close as possible to how St. Francis lived: no possessions, no touching of money, extreme simplicity of clothing, bare feet, begging only for short term house supplies.

The crypt’s bones belong primarily to Capuchin monks buried here between 1528 and 1870.   Yet, while building the crypt, old Roman tombs were unearthed and added to the Baroque and Rocco styled decorative displays with the foreboding statement: “What you are now, we once were; what we are now, you shall be.”  After I had absorbed the friars’ universal message, I went to drink some water at the nearby Fontana delle Api (Bees) and to consider once more the mythical sea god in Fontana del Tritone, both made by the masterful Bernini.

The day concluded with a relaxed walk through Villa Borghese to reflect on nature and on the vanity of artifice.  This most popular park begins on Via Veneto, a few blocks north of the Capuchin Church, past the American Embassy, to the Porta Pinciana – an ancient city gate attached to the defensive Aurelian wall.  Nearby, in the park, stands an enchanting statue of Faust and Mephistopheles dedicated to Goethe. In Rome, works of fantasy balance against works of ruin.